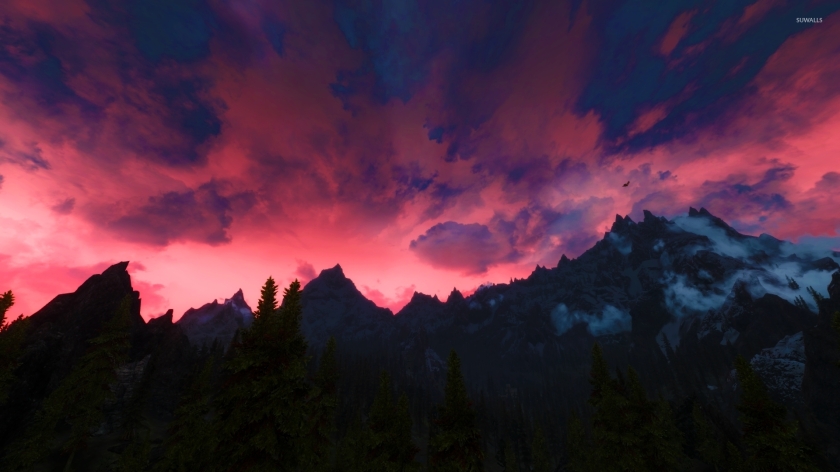 Dark clouds circled the sky above the small village. The clouds swallowed up all light and soon the entire village was either standing in the grey cobblestone streets and dirty alleys or poking their heads out windows and doorways looking up in curiosity and awe.

Not a single star could be seen shining throughout the entirety of Pandora. The clouds bellowed furiously at the crowd. Purple streaks of lightning danced in the sky like fireflies. It seemed to be just another wonder of the world. Like a shooting star or the glowing lights of the north. The people were not scared, there was no danger. Or so it seemed… For the brightly colored lights did not fall from the sky but rose up into it, an anomaly of nature originating from an unknown source.

The clouds began to swirl, creating vile and twisted shapes above the village. Opening up and forming an enormous crater in the sky. Light spilled from the hole on to the land below bathing it in red. The hole grew bigger and bigger as if the sky was tearing itself apart. The clouds were swept further and further away until they were black smudges in the distance. This gateway to hell had no clouds no stars nothing, just a sea of blood swallowing up the midnight sky. Shadows began to swoop down from above. Leathery wings beat overhead, and ferocious roars came from needle filled mouths.

Panic washed over the crowd in thick waves. Some instantly became alert letting out bloodcurdling screams of horror, grabbing their loved ones and fleeing for safety. Others were paralyzed in shock and disbelief. Some of the creatures landed on the shingled roofs and icy cobblestones, others stayed circling the skies inflicting terror on those below. More and more demons fell from the sky as each minute passed by. The monsters of hades had come. Their bodies were monstrous and grotesque. Some had jagged claws and fangs, some were nightmarish amalgamations of foreign animals, and others looked like nothing of this earth. Chaos erupted everywhere. Demons chased after helpless families digging their teeth into their flesh and ruthlessly tearing bodies’ limb from limb.

A cat-like demon the size of a small horse had set to work on a person observing the panic, now unrecognizable from their injuries. Two small children watched from the other side of the road, too panic stricken to move. Neither of them looked older than eight years old and when one desperately tried to back away, knocked over a nearby trash can. Leftover food and garbage spilled onto the road. The clatter of metal against stone instantly alerted the demon. Its ears twitched and its head shot up. It saw them as soon as it turned. The demon still had plenty to eat from its last victim but the thrill of killing was what it really wanted. Its golden eyes met the gaze of the youngest boy. Its mouth opened wide in a sadistic smile and double rows of vampire like teeth the size of small tusks descended and rose from the lining of the jaw. It snipped its teeth together curiously, making a sound like scissors cutting through paper. The children stood stock still barely a few feet from the bent and drooling head and held their breath.

It scraped a paw across the ground leaving three thick claw gashes on the cobblestones. The beast bent its legs and pounced. The boys let out a scream and shielded their faces, but the pain never came… and neither did the gruesome demise that they believed would befall them. The oldest brother took a peak threw his tightly clenched fingers and let out a tiny gasp. The pouncing demon was barely inches from his head, its mouth still opened wide but its eyes were empty. The life had disappeared from it. It was so close he could taste the rancid decay of rotting flesh on its breath. Underneath the limp body of the demon cat was a man, holding a sword that dug deep into the creature’s torso. The man tossed the creature onto the ground with obvious ease. The boy instantly forgot his fear when he saw the face of his hero.

The man’s long curly hair that brushed against his shoulders was wet and its usual brown color looked more of a dark red. Shadows crept from under his eyes darkening his scarred and unshaven face. His masculine arms tightly held onto the jewel encrusted hilt of his sword. Its gleaming blade was covered in a thin layer of warm blood. There he stood in all his power and glory, the mighty and formidable Benjamin Beotrix. He gave the boys a slight nod and walked down the street with a confidence in his stride, his black cloak billowing behind him. Benjamin strode down the narrow street watching the epidemic, deciding what move he should make next. People needed help all around him.

Reptilian hounds scampered across roofs sending shingles and slate crashing onto the road. Birds of prey, there rotting flesh leaving the air thick with death, plucked members of the crowd from where they stood and dragged them off into the sky. Thousands of imps swarmed the streets like locusts devouring anything they could sink their teeth into. A sea of drooling mouths hurtled towards Benjamin. Their claws lashing out wildly, their teeth wet with blood, their eyes dark and pupil-less. It was nothing that he hadn’t seen before and even with so many they were far to week to bother him. With ease he focused the magic in his body to his right hand. Magical energy spiraled in his palm becoming stronger and more visible by the second. It was a beautiful shade of blue and if you looked deep enough you could see all the colors of the rainbow. It had taken shape now but bubbled and twisted uncontrollably. Looking at it was like looking into a pond that could not stay still, with all manner of fish ducking and darting underneath, there colored scales glinting like jewels. He focused the swirling magic into the shape of a ball and threw it at the imps. The impact sent the imps flying in all directions.

He walked through the town, shooting off blasts of magic and cutting down any demon that crossed his path. But for every demon he finished off, a hundred more would take their place. He was gaining some help now. A few men and women were trying to hold the demons at bay. Among them were even a few sorcerers using magic to try kill some of the lesser demons.  Larger demons had begun coming through the portal. An enormous dragon swooped down beating its armor plated wings. Gusts of wind bore down upon the village sweeping people and demons off their feet with such force that when they hit the ground they were knocked into unconsciousness. The dragons golden scales sparkled in the red sunlight like a thousand burning candles. Its eyes shone as brightly as its scales and its pearly white teeth jutted from its mouth like jagged knives. It let out a high pitched roar that shattered glass, wood and stone. Ben realized that he was not strong enough to defeat this underworlder. It was a greater demon and its magical abilities would probably far surpass his.

He decided that he could not do this alone. He drew a knife from his belt. The knife had runes inscribed upon it and had the tooth of another dragon encrusted on the hilt. He made a small incision in his hand with the knife and covered the blade in his blood. The runes on the knife began to glow as he muttered a summoning incantation. With the final word spoken he thrust the blade into the air and then dug it deep into the ground. A twisting cloud rose from the earth. It spiraled upwards frothing at the edges, leaving Benjamin’s mouth tasting of brimstone. The cloud rose up into the sky, blocking out all light for a short period. Two green eyes shone through the mist and a mouth formed from the cloud. The cloud wrapped itself around Benjamin creating a sound proof barrier. The beast licked its smoky lips. “Who dares summon the great and powerful Grimnak, King of dragons, destroyer of far drop, and god of the blaze tribe” the demon bellowed.

“No need for first impressions Grimnak so get rid of that mist, it smells dreadful and let’s get down to business”

“Oh Beotrix it is you” the demon said with courtesy. “I did not know I was in the presence of a master. It’s been so long.” The demon broke free from the confinements of the smoke revealing itself. The dragon was easily as big as a small mountain and each beat of its wings made the earth shake and crumble.

“Yes it has been a while since I last called upon you, but this is a desperate time”

“Aye I can see that” said Grimnak raising his armor plated head to look at the sky. “This world is tearing itself apart. The entire underworld will be here soon enough”

“Yes well I was hoping to close the portal before that happens” Benjamin said. “I don’t want any greater demons joining this fight”

“I believe some already have” and he tilted his head towards the golden dragon circling the skies.

“Yes you may be right. Let’s get a move on then”. Benjamin hopped on to the mighty reptiles back and the beast took flight. As they flew towards the oncoming demon hordes Benjamin knew one thing. He would fight for these people’s lives until victory or death.