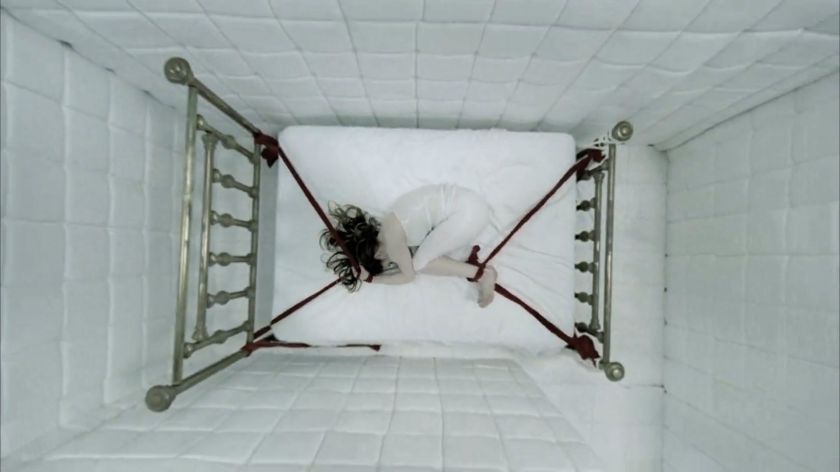 These white walls hold me captive. I thought as long as I was incarcerated the darkness would not be able to penetrate the white walls. But it seeps through. Like a disease it constantly spreads. Looking to infect everyone and everything. Not even the white walls can hold back the darkness. Eventually it will consume me.

During the day I have the strength to hold the darkness at bay, but when the light flees from the ferocity of the night I am at the mercy of the shadows. I can’t move. My arms are sewn across my chest. I cannot flee because the white walls will not loosen their grip.

There are other victims like myself beyond the confines of the white walls. I hear them cackle and moan. They beg for sympathy from a higher power that has already shunned them and slowly, one by one, they reach the same conclusion as I have, and become content with their damnation. I do not fear the screams of sheer terror and wretched sounds of self-inflicted pain. What I truly fear is silence. The minds of some of the victims are a vacant, desolate place. Their personality and their energy have been stolen by the demons. Beings who by day claim they have the desire to cleanse us of the darkness but by night take such a repulsive satisfaction out of watching the darkness feed upon our psyche.

The demons leave their victims with a small scar atop their head, their personal signature. They take a small portion of our brain and the remnants of our soul, and a walking corpse returns. They try justifying such atrocious acts of cruelty through the argument that it will cure us. We will no longer fear the darkness they say…. but we won’t feel anything else either. The idea of being alive yet unable to feel or reason terrifies me even more than the sadistic whims of the shadows.

I have heard them whispering. I am their next project. I doubt that when they finally take me I will return. There is the possibility that they will store my body in here but my mind will never reunite with the white walls. Of that I am certain. For a period I was content with my fate. I would be freed from the white walls tyrannical control and would slip into whatever pleasures awaited me in the next life. But I have seen the others and I have heard their silence. I will not slip into some fantasy world that religion has discreetly forced us to believe. It will not be peaceful. They will not release me, they will mutilate me. They will take pleasure in the extensive torture I am destined to endure. They will remove everything that makes me, me. That makes me human. Yet in the end I will still be alive, if you can call that such a thing.

There is a breach in the white walls. A patch of the wall opens up and two demons clad in white enter. Their eyes show not even the tiniest sliver of empathy. In their presence I am weakened. The darkness begins to take hold once more. I scream in desperation. I scream until I rip my vocal chords apart, until they are tattered shreds and my voice sounds ghostly. The demons hold me down. I plead with my legs to run. I beg my arms to retaliate. My limbs have forsaken themselves and show no signs of regaining hope. I am paralyzed.

They lead me down a long hallway. I never knew that the white walls extended this far. Their control must be greater than I thought. There is so much I don’t know. What lies beyond this hallway? In truth I don’t want to know. These white walls are my prison, but they are also my sanctuary. As much as I want to escape I would be lost without them.

The darkness seeps into me, devouring my emotions, devouring my soul, devouring me. It seeps into my veins, poisoning my organs. It butchers all memories, suffocates all happiness. The darkness crawls over my skin. I feel it. I feel its lust. God kill me. Please kill me. I feel it feasting on my mind greedily. I don’t know how long I have. Any moment now the last whisper of hope I possess will slip away and misery will engulf me in its bleakness. I’ll no longer be me. I’ll be an abandoned shell. I can’t take it.

Kill me while I can say good bye.

Kill me while I still possess some insignificant scrap of dignity.

Kill me while I’m still me.